“It seems that you are busy.”

Baek So Chun, the master of the Ruling Fire House. She calmly guided her surprise visitor to a seat. That visitor naturally sat down on the seat, and spoke.

“I had some free time, so I decided to drop by. Ahri’s doing fine, right?”

Gongson Chun Gi. He tucked his head and grinned.

“She doesn’t go crying to try see me every night, does she?”

“…….Thankfully, that age seems to have passed now.”

Baek So Chun brought some fruits and sweets, and opened her mouth.

“To be honest, there was a little incident that happened a while back.”

“Ahri seemed to have got outside without permission to pay a visit to the Garden. Nothing major had happened, but…….”

Baek So Chun paused a bit, then spoke.

“Due to my lacking talents, I almost let your precious daughter suffer from something terrible. I apologize.”

Gongson Chun Gi’s eyes got thinner. When Baek So Chun saw this, she let loose a cold sweat and bowed down.

“…….I am willing to take any punishment.”

“Yes. Thanks to her guards that found her in time, nothing big happened, but…….”

“It seems that the Young Lady met the Lord Heir in the Garden. They even shared a conversation, but nothing eventful happened, thankfully.”

Gongson Chun Gi spoke as he began to tap his fingers restlessly.

“She met that child there?”

Baek So Chun sent someone to bring Gongson Ahri. A few moments later, Gongson Ahri could be seen running towards them at full speed.

Gongson Chun Gi hugged his daughter who had been running at him from his seat.

“Why didn’t you come over all this time? Were you busy?”

“Of course. Your daddy’s always busy, you know? By the way, it looks like you didn’t just grow tall during the time I haven’t seen you. Looks like you got a bit weightier, too.”

“Keke, you don’t have to feel so ashamed. You’re at the age where you start to grow up, after all.”

“Actually, some things happened, so I just went out for a bit. That’s why I haven’t been able to visit.”

“Outside……. you mean the mainland?”

“Yeah. I went to the mainland.”

Gongson Chun Gi bitterly smiled when he saw her daughter’s gaze full of curiosity and reverence. That was because his daughter didn’t know much about the mainland.

“When everything that’s happening here blows over, let’s go on a trip to the mainland. I’ll show you some interesting stuff.”

“There’s something that’s been bugging me since a while back, you know?”

“You went to the Grass Shoe Garden, didn’t you?”

Gongson Ahri jumped up in surprise, then began to send small glances at Baek So Chun. Looking at that, Gongson Chun Gi smirked and spoke up.

“Don’t worry. I’m not here to punish you or anything. You went to the Garden, right?”

Gongson Ahri stared at Baek So Chun wordlessly for a moment, then nodded with an apologetic face.

“That’s good. How was he, that boy? I was actually thinking of bringing him here. But you know, bringing him all the way here is a little troublesome……”

The Ruling Fire House was a forbidden land for all men. Anyone who would step inside without permission would be killed on sight. Of course, the Pope was an exception to this rule.

Gongson Ahri tried to pretend to be innocent, but in front of Gongson Chun Gi, such acts were useless.

Gongson Ahri backed away more and more under the gaze of her father.

When Gongson Chun Gi wouldn’t yield with his gaze, Gongson Ahri slowly looked away from her father completely.

“……..Fine, I won’t ask much more about that now. Looks like things would get awkward if I try to pry more……. It might be better for me to stay ignorant, right?”

Gongson Chun Gi let out a tired sigh, which was unusual in itself, and spoke.

What did he want? When Gongson Ahri let out a confused expression, Gongson Chun Gi opened his mouth yet again.

This was, again, a very vague question. The situation was a little awkward to say that it was good, but then she couldn’t say it was bad, either. That’s why Gongson Ahri chose to say the safest thing she could think of at the moment.

She didn’t know what her father was going for, but when this question arrived, she answered immediately.

How should she respond? After thinking a bit, Gongson Ahri decided to respond honestly.

Gongson Chun Gi grinned when he heard his daughter’s words.

When Gongson Ahri made a confused face, Gongson Chun Gi stroked his daughter’s hair and spoke.

“It seems that you have the same type of eye that your mother had.”

“Yeah. It’s what we call ‘True Eyes’. Normally, you’d have to train like hell to get it, but some people are just born with it. Like you. And your mom. ”

“I wasn’t sure if you had it or not till now, but this made it clear. This is good.”

“This will definitely help you out in life.”

His daughter would definitely live longer than he. Gongson Chun Gi couldn’t keep taking care of her forever.

But as long as his daughter had something like this, living would be much easier for her. Thinking that just made Gongson Chun Gi happy.

“I’ll have to go see my disciple now. I left him there for a little too long…….”

Putting someone in an unfamiliar environment for a long time isn’t good.

No matter how calm and intelligent Cho Ryu Hyang was, he was still eleven. The boy needed to be cared for.

Plus, didn’t the boy lose a teacher who was considered to be like his father? The boy really needed some help. When Gongson Chun Gi thought this much, he began to feel a bit hurried.

“I’ll be back some other time. Don’t do anything stupid till then, and stay put. Alright?”

Gongson Chun Gi hugged his daughter tightly, then grinned at Baek So Chun as he spoke.

“You do not have to worry, Your Holiness.”

Gongson Chun Gi left an afterimage as he looked at Baek So Chun bowing at him. He was moving faster than the wind itself to see his disciple.

‘Coming here was good…… but what’s going on here?’

The Garden was in a mess. He felt something going on a far away, so he sneaked in silently, but to think he’d see such a thing…….

For some reason, the Heaven Destroying Guardian Corps (守護滅天隊), who only existed to protect the Garden, was attacking Cho Ryu Hyang.

And surprisingly, the Administrator was just watching all this from the sidelines. Gongson Chun Gi didn’t know what happened, but the situation didn’t look too good.

Gongson Chun Gi thought of moving, then changed his mind, and sat down on the spot.

He knew that his disciple possessed Godly Eyes that were said to be unique even among unique eyes, but he didn’t know that it could be this powerful.

Gongson Chun Gi tucked his chin in his fist, and watched the battlefield with interest.

The boys at the Guardian Corps were moving violently, but they were still maintaining some calm. Because of that, Gongson Chun Gi could watch this whole thing without feeling any caution.

But even so, the difference of martial prowess between these people and his disciple was immense. Even then, the guardians of the garden couldn’t touch Cho Ryu Hyang.

‘So that’s what the boy’s eyes are like? He’s using them in a unique way.’

He learned something good.

Gongson Chun Gi observed all this calmly, then suddenly flinched a bit. The formation was crumbling.

Gongson Chun Gi looked at the Administrator with some interest. There was still a way to escape this, even at this point of time. But could that boy be able to notice that?

While he had been wondering that in his head, the Administrator began to send out some commands to his subordinates.

As expected of the Administrator. That fellow really couldn’t be underestimated. Gongson Chun Gi leaned forward, with a face full of excitement.

How this event was caused in the first place no longer mattered. Just where would he be able to see something as entertaining as this?

The feeling of worry he felt for his disciple disappeared in an instant, and that feeling was replaced by curiosity and excitement. He really did stumble on something good today.

‘So, how will you get across this, Cho Ryu Hyang?’

The shape of the formation changed abruptly, and Cho Ryu Hyang was suddenly facing a great danger. Could that boy, his disciple, overcome this danger? This new formation wasn’t something one could break just by knowing the path.

Gongson Chun Gi’s eyebrows twitched. Just a moment ago, he felt the air itself tremble along with Cho Ryu Hyang’s breath.

‘That boy, did he notice me watching him?’

It happened in only an instant, but Gongson Chun Gi clearly felt Cho Ryu Hyang looking at him. Just what was that boy? Did he already possess some kind of strange skill inside his body at such an age?

That skill that just managed to move the surrounding air for a moment. He didn’t know what it was, but that skill would soon be activated.

‘Un Hui, this is unfortunate, but this is your loss.’

It seemed some kind of a bet was held between the two or something, but he didn’t know about its details. Anyways, to Gongson Chun Gi, it seemed that Cho Ryu Hyang had won this battle.

And that was exactly what happened. Cho Ryu Hyang instantly managed to suppress Un Hui’s subordinates, and escaped the formation.

When Gongson Chun Gi saw this and nodded, he made eye contact with Cho Ryu Hyang once more.

‘Please pretend you haven’t seen me……’

At the time Gongson Chun Gi was trying to say this with his eyes.

The Administrator stared at Cho Ryu Hyang for a while, then fell down on his knees.

When Gongson Chun Gi made a confused expression, Un Hui bowed his head down and spoke.

“……..The Administrator of the Grass Shoe Garden, Un Hui, will dedicate the remainder of his life serving the Heir of the Heavenly Demon Church.”

Gongson Chun Gi’s jaw dropped. The Un Hui he knew was a really prideful fellow who wouldn’t dare bow down before someone else.

Wasn’t that guy the one who had enough courage to try have a go at the Pope himself? Gongosn Chun Gi kept the guy around because of that, but just what was happening here?

‘Just what happened between you two?’ 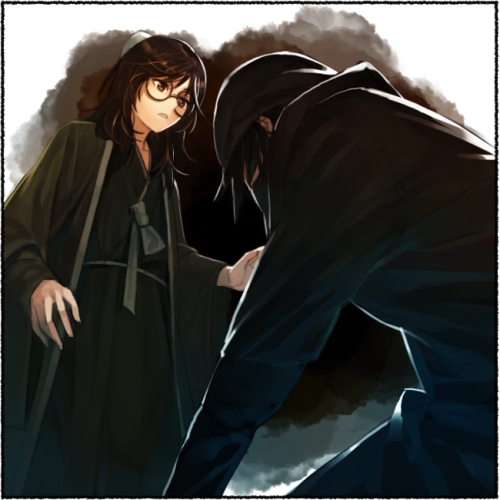