Hopefully I can release 3 chapters a week soon…. and then I’ll get back into the regular schedule again.

The Heavenly Demon Church began to make preparations to leave the moment the war ended.

They had already retrieved the Moon Edge Blade Technique, completely decimated the army of the Alliance, and proved to everyone who the strongest in the continent was.

They no longer had any reason to stay here. Gongson Chun Gi sent everyone except his private guards back to the Ten Thousand Great Mountains.

And when he looked at the old man who came to visit him all the way from the Ten Thousand Great Mountains, he smiled.

“What’s the medicine gramps doing all the way over here?”

“Obviously I came because I got worried about Your Holiness.”

Sunwu Jo Duk. He was an old man who had a mysterious, powerful aura about him. When he saw the Pope, he immediately set to take a look at the various parts of the Pope’s body. After a while, the old man sighed in relief.

“You somehow managed to endure in that state. That’s amazing.”

“Well, you know my endurance is amazing. After all, I stayed healthy even after getting beat up to death by my teacher.”

“That’s obvious. Can you show me your arm?”

Gongson Chun Gi stretched out his right arm. The Demon Doctor, Sunwu Jo Duk. That old man was the only one out of the eight guardians who sided with Gongson Chun Gi for peace.

The others kept pestering Gongson Chun Gi about expanding into the mainland, but Sunwu Jo Duk was unexpectedly a person who enjoyed a peaceful, quiet life.

And he also happened to be the person to know Gongson Chun Gi’s secret.

“This is a relief. The Greater Magic Recorder (記呪大法) hasn’t broken completely. It’s about to crumble, though.”

“It might be because I forced the thing back in.”

Since Gongson Chun Gi forcefully deactivated it to destroy Baek Mu Ryang, it wouldn’t be strange if it broke now.

“Of course it would be like this if you put it back forcefully. Thankfully, I brought a spare one here. If I didn’t happen to have it, it would’ve been terrible.”

“I’ll show you how to do it again, so don’t forget this time.”

Sunwu Jo Duk brought out the same type of bracelet in Gongson Chun Gi’s wrist from his sleeves, and put it on the Pope’s wrist. After that, he began to whisper some words.

With a small vibration, Gongson Chun Gi felt pain akin to having his muscles compressed in one place. He frowned. No matter how many times he experienced this, he never managed to get used to it. This disgusting feeling of having his muscles being forcefully restricted.

“I’m indebted to you again.”

“You’ve been telling me that since you were a child. I feel thankful.”

Gongson Chun Gi smirked. All the previous Popes of the Heavenly Demon Church suffered from the same condition as he.

The side effects were so strong, that unless he used a seal on himself, even he couldn’t suppress it fully.

“It’s good that you’re overflowing with energy, but if you don’t suppress it, you’ll go mad. We wouldn’t be able to stop you if that happens.”

Gongson Chun Gi, the strongest man in the world. If he were to go crazy, the world would turn into hell. After all, there would be no one that could stop him.

“You said you chose a heir. You show show him to me, too.”

“Ugh, that’s the only thing that you old men care about.”

“It’s good that I got the chance to see the heir before I die. I thought I’d die without ever seeing him.”

“Well, it’d be no surprise if you died any time now.”

Sunwu Jo Duk looked at the complaining Pope before him, and smiled. Sunwu Jo Duk served the Pope ever since the Pope was a child. Therefore, he was able to see the immense amount of talent that Gongson Chun Gi possessed for a long time.

But no matter how long he stayed with the Pope, he never managed to see a heir be chosen. There simply wasn’t anyone talented enough to inherit Gongson Chun Gi’s power. He thought that the Pope’s powerful technique would get lost after the Pope’s death, but what just happened?

The Pope chose a heir. Didn’t that mean that the Pope managed to find a child with enough talent?

As a person who loved the Heavenly Demon Church dearly, this news made him indescribably happy.

“Before I show him to you, I need to ask you something.”

“I’m thinking of teaching this boy something other than Shura Environment. What do you think?”

Sunwu Jo Duk blinked a few times when he heard this. But he soon realized what the Pope was aiming to do, and opened his mouth with a serious face.

The Pope needed a power that seemed to be unattainable by humans. That was the mission given to the one chosen by the representation of god.

“I don’t want to let him inherit it without me taking care of the side effects. These kinds of annoying side effects, I should just end it in my generation.”

“It’s ok. I just have to show them it was a right decision.”

Sunwu Jo Duk thought a bit. Was there any other martial technique that could rival the power of the Shura Environment? There wasn’t.

Since the side effects of the Shura Environment seemed to trivial when compared to the actual power of the technique, the technique was passed on through the generations.

When Sunwu Jo Duk thought that much, he suddenly realized something, and opened his mouth.

“Is it the Moon Edge Blade Technique?”

“…….You’re perceptive. It is that technique.”

“Is that technique really that amazing?”

“Aah……. it is pretty interesting.”

Gongson Chun Gi grinned. It was a confident grin. Sunwu Jo Duk looked at that face of the Pope, and nodded.

“I knew you’d understand. And don’t worry. I didn’t say I wouldn’t pass on Shura Environment. When it comes to destructive power, there is literally nothing under the heavens that can rival it.”

Gongson Chun Gi thought of his disciple while talking, then made a depressed expression.

“But you know, my disciple actually has some resentment against the Alliance.”

In other words, they were hard to fight. Gongson Chun Gi, thinking that, scratched his cheeks and spoke.

“I already promised to help the child take revenge. I somewhat managed to understand what the boy was feeling, so that happened. I can’t help him directly, since he wants to take revenge with his own hands, but I want to do everything else in my power to help. I guess I’m still a bit immature when it comes to things like this.”

Gongson Chun Gi said this, and at the same time commanded Lim Hak Gyum to bring Cho Ryu Hyang. He once again opened his mouth.

“So when you see the boy, don’t ask him anything about the Alliance. It’ll just make him remember some bad stuff.”

A little while later, Cho Ryu Hyang stepped into the room. It seemed that he calmed down a bit after a few days had passed. But he still seemed a little unstable.

“You’re here? Good. This is Sunwu Jo Duk, the man in charge of the church’s medicine department. Say hello. You’ll be relying on him a lot in the future.”

“My name is Cho Ryu Hyang. I’ll be in your care from now on.”

Sunwu Jo Duk observed Cho Ryu Hyang’s body with a face filled with joy and satisfaction. His instincts as a doctor had kicked in. After a moment, Sunwu Jo Duk tilted his head in wonder.

“Nah, he was already like that from the start. I was surprised, too.”

Fa Mao Xi Sui was a technique that experts used for their disciples in order to make a disciple’s body be suited for training. It was extremely complicated, and used a lot of power, so it wasn’t easy to use.

But the effects of the technique was truly amazing. It would essentially raise a person’s training speed exponentially. 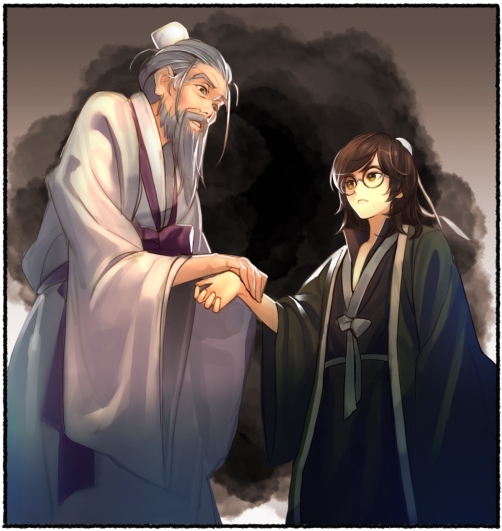 “Of course, my eyes aren’t just for show.”

Gongson Chun Gi grinned joyfully. Only Cho Ryu Hyang, the subject of this conversation, didn’t know what was going on.

“It’s similar. But I don’t think it’s the same thing. You know it, too, don’t you? Something like that definitely can’t happen.”

The Bone-Changing Growth was something that only happened in the harmonious stage. That was why it was impossible for a young child like this to go through that growth.

After all, a harmonious stage only happened once a person attained knowledge that would change their entire life.

Just what was this? The young lord’s body was already in the best possible condition in order to learn martial arts. The joints in the body were extremely flexible, and the energy veins in the body weren’t clogged at all.

The strangest thing lay with the dantian. There was something strange residing in it. Something small and round, and at the same time, hard. Something like that was just laying in the young lord’s dantian.

That small sphere seemed to contain an immeasurable amount of energy.

“That boy studies something different from martial arts. I think his body changed like that because of whatever he was studying. Am I right?”

Cho Ryu Hyang scratched his cheeks. What should he say? Should he reveal the existence of Zhuge Liang? Was that alright?

“I’m not angry at you or anything. I’m actually happy.”

Gongson Chun Gi realized a long time ago that this boy was hiding something other than mathematics. That was because Gongson Chun Gi’s eyes could easily perceive things of that sort.

But he still pretended to not know about it. After all, everyone has a secret they want to keep.

Gongson Chun Gi wasn’t selfish enough to try to force the secret out of his disciple. He simply believed that the boy would naturally come to tell him about it in the future.

“I finished checking the Moon Edge Blade Technique. That’s why I called you. To introduce this old man, and to tell you about the book.”

Cho Ryu Hyang’s eyes turned bright when he heard this. He could finally learn martial arts. He had to take revenge for his teacher as soon as he could.

That was the only way he could calm his tormented heart.

Gongson Chun Gi took something out of his sleeve, and threw it at Cho Ryu Hyang. That thing landed directly on Cho Ryu Hyang’s open palms.

Gongson Chun Gi opened his mouth towards his dazed disciple.

“This is what you will be learning in the future.”

Cho Ryu Hyang stared at the book in his hands. This was the first meeting between Cho Ryu Hyang and Ak Jung Pae. A meeting that transcended a hundred years.